Creator of the multiverse

not married he has no time for that

Blank nothingness before the multiverse was created

never died or ever will truely

Darth senate is an joke character made and used by Gojiratheking.

UNLIMMMITTTEDDD.... POWER (AS IN THE CHARACTER LOLZ)

Darth senate and red god ty-dawg meets power in an white space, after creating meme land, they went to an meeting room, Power decided to create foodtopia, Ty-dawg didn't trust power, neither did Darth Senate, They then threw power out of the multiverse (even though it was eternally expanding so the multiverse would of just grew to the point where power would just be back but whatever...), and then senate and red god ty-dawg gave power's... powers...? to sanesss.

Oh no! Attack of freaking tokyo

He then claimed he would blow everything up, But some people opposed to that, But it was too late, Darth senate had already blown them up too.

Darth senate then claimed he couldn't be stopped, however...

The moon from ducktales NES started playing as 4KIDS rose from the ground.

GTK and gallo noticed an portal made of cheesy memes open, Darth Senate went into the portal, leading to where GTK and gallo were. GTK told gallo to fire twinkies at Senate, but then realized who he was and told gallo to stop, but gallo did it anyway. Gallo proceeds to do it anyway, but GTK yells at gallo to stop, they then started running. Darth senate was firing multiverses at them, GTK and gallo throw planets at him, but the sheer size of the multiverses OMGROFLOLBBQSTOMPS the planets. Gallo and GTK run again, This time going so fast it breaks the wall that shielded them from the grand dads, Darth Senate proceeds to kill all the grand dads, and unleash the flood from halo. GTK and gallo decide to get orange juice and whatever kills the flood from halo. GTK wasn't sure how orange juice helps, but he took what he got.

GTK shoots at the flood, then both of them teleport to the halo ring, activating it. The halo rings fire, disintegrating the flood.

Darth senate was not pleased by it, screaming "NO, NO, NOOOO" and then proceeding to shoot force lightning. GTK was in extreme pain by this. Darth senate laughed, whilst GTK screamed for help. Gallo emits an shield, making darth senate scream "I am darth senate!" and summon cringy memes.

GTK and gallo fired missiles at the cringy memes, blowing them all to pieces. Darth senate got tired, and decided to use his ridiculous powers to kill GTK and gallo.

Gallo and GTK wake up in an white room, with the DSi shop theme playing. Then an genie appears, GTK asks if he and gallo can come back to live, genie was okay with it, but if they die again, it's for good.

Back in the control room, Only undrinked orange juice, darth senate, and GTK and gallo's dead bodies are in there. GTK and gallo come back to live and get up. Darth senate claimed that they used cheat codes, but it was the genie. Darth senate fired all known powers in fictional, non-fictional, etc history.

But then, the mario maker "EDIT" button appeared next to GTK, GTK pressed it, heading into the edit mode, GTK pressed the erasor, then erasing Darth Senate, then pressing "Save course."

GTK then says "Ain't I an stinker?", They then grab some cups, pour some orange juice into them, drink them, and walk away. 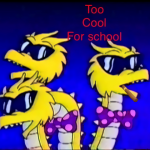